As my colleague Emily Embury noted in her blog entry on ed tech policies, it’s an interesting time in education. With Race to the Top and Investing in Innovation (i3) funding included in the 2009 American Recovery and Reinvestment Act (ARRA), the federal government is making an unprecedented investment in schools. Continuing this trend, the Obama Administration issued a budget proposal for Fiscal Year 2011 that increases overall education spending by $3.5 billion.

During the CoSN 2010 Conference, we had the opportunity to hear from Jon Bernstein, founder and president of Bernstein Strategy Group, to learn more about the recent changes in education technology funding and what to expect down the road. 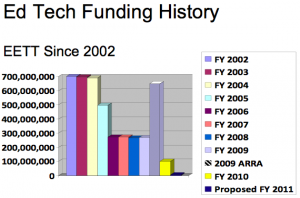 In Bernstein’s view, the area of greatest concern for educators, and the education technology community, is the elimination of the Enhancing Education Through Technology (EETT) program in the President’s proposed budget, as this is the only source of money dedicated to the purchase and implementation of education technology. EETT also provides funds for teacher professional development to integrate technology effectively into the classroom. While President Obama and Education Secretary Arne Duncan have stressed the critical importance of technology to education reform and ongoing school improvement, the FY2011 budget is the latest attempt by the federal government to eliminate the EETT program.  It was implemented in 2002 at a funding level of $700 million, but appropriations have declined nearly every year since, excepting FY2009, when ARRA funds boosted the program. Instead of funding EETT, the Administration proposes “infusing” tech into other education programs.

However, Bernstein noted that the FY2011 budget is likely to change since the Elementary and Secondary Education Act (ESEA) must be reauthorized first. The Administration used the budget request both to seek appropriations and to outline proposed changes to ESEA, consolidating 36 existing programs into nine priorities, essentially calling for fewer, larger programs; more flexibility; and more competitions:

Berstein pointed out that ed tech groups such as CoSN, ISTE and SETDA are seeking meaningful “infusion” with new language reflecting mandatory tech spending and competitive preference priorities (e.g., make technology a competitive preference priority in the i3 program, and require that at least 5 percent of all funds under Effective Teachers and Leaders State Grants be used to train teachers in using technology and integrating it into curricula).  They also propose a separate ed tech program to coordinate and implement infusion. These groups, as well as SIIA, will continue to support ATTAIN legislation (HR 558/ S.818).

The House and Senate are working on separate versions of ESEA, and the Administration released an outline of its proposed changes and ideas to Congress on Saturday, March 13th. Upcoming elections, and the controversial ideas set forth in the Administration’s proposal, such as consolidation, merit pay, and drastic changes to the way schools are evaluated (no more AYP), pose major obstacles to ESEA reauthorization this year. If ESEA is not passed by May, its funding will be based on other legislation and the Administration’s priorities, which are:

To provide you with more information about current and prospective education funding, we’ve compiled articles on our Diigo account from our friends in the education media that provide superb in-depth coverage of the topic and related issues.

Given the pending changes to ESEA and the FY2011 federal budget, how are you adjusting your marketing and sales plans and goals? Will you be changing your product development focus to align with the new consolidated programs?  How will you help schools and districts find the funding they need and “infuse” technology?