By Emily EmburyNovember 23, 2009 No Comments

If a picture is worth a thousand words, then imagine the impact of a video.  During the 2009 Public Relations International Conference, Laura Sturaitis of BusinessWire and Greg Jarboe of SEO-PR discussed the use of multimedia as a way to increase news announcement visibility.

Search engine optimization efforts often focus on Google, but a substantial number of searches are also taking place on the second largest search engine – YouTube.  In September 2009, while almost 9 billion searches were conducted on Google, there were 10.3 billion videos viewed on YouTube.  According to Jarboe, Americans are spending more time looking for videos on YouTube than they spend searching for content on Google.

The public relations industry is being rapidly reshaped by the widespread access to online video, and how it can impact public opinion.  One example is the public relations crisis experienced by Domino’s Pizza after employees posted a prank video on YouTube.  Because Domino’s was not monitoring YouTube, the company’s brand was harmed by mounting negative comments that went unanswered for two days.  In a belated attempt at damage control, Domino’s created a Twitter account to address the issue, and presented its chief executive in a video on YouTube, but it was too late to prevent the bad publicity from drawing international attention. 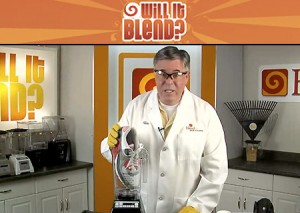 A second example involves the company Blendtec, which sells a line of industrial-strength blenders.  Blendtec created a viral marketing campaign consisting of a series of videos on YouTube in which the company founder attempts to blend various items to show off the power of his product.  After spending $50 to produce five videos, the company experienced a 700 percent increase in total blender sales.

To reach this new audience, companies are recording video segments to accompany their news announcements.  Online video increases the visibility of a news announcement, connects the online audience to a company’s “human face,” and positions the company as an industry leader sensitive to changing media needs, and in tune with Web 2.0 and social media trends.

During NECC 2009, CB&A recorded video interviews to support news releases distributed during the conference.  The videos became a valuable component of our clients’ online media kits, and were publicized on the CB&A Facebook page and YouTube channel to cross-promote the news and make the content available to bloggers.  In addition, clients featured the videos in their online newsrooms and YouTube channels.  Clients experienced increased coverage, especially in education blogs such as The Educators’ Royal Treatment.  We’ve added more videos to our channel in subsequent months.