Every year CB&A conducts a Birds-of-a-Feather Roundtable during the annual CoSN conference. For those of you unfamiliar with CoSN, it’s a professional organization for school district technology leaders. The roundtable sessions are designed to give participants the opportunity to connect with their peers and industry experts to discuss current issues, hot topics and technology solutions related to K-12 education.

During the CoSN Conference 2010, CB&A led a session entitled “All a Twit About Twitter: Using Twitter as a School and District Communications Tool.” To help inform the discussion, CB&A surveyed educators on the CoSN pre-registration list and analyzed replies from more than 50 respondents (35 percent response rate). Educators attending the CoSN Conference include school district CTOs, CIOs and technology directors.

Educators’ Personal Use of Twitter
More than half of respondents (53 percent) said they have a personal Twitter account, but don’t use it often. Their leading reasons for not using Twitter included a lack of time, and the belief that other forms of communication were more effective. Conversely, 22 percent of respondents reported that they use Twitter, primarily to network with colleagues, share education-related information and follow industry news. 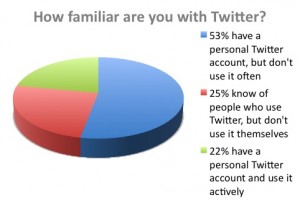 School System Use of Twitter
After surveying CoSN attendees’ personal use of Twitter, questions shifted to school and district use of Twitter. More than half of respondents (57 percent) reported their school or district had a Twitter account, but only 8 percent said their organization published regular updates. Twelve percent of respondents indicated that their school or district published updates on a monthly basis, 26 percent said weekly, and 54 percent reported never. 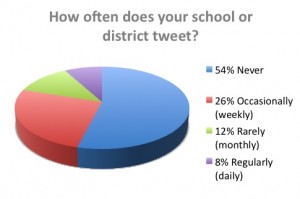 Key Findings
The survey results seem to indicate that while many respondents and school systems have a Twitter account, many struggle with how to use the communication tool effectively. Stay tuned for an upcoming post by Kristen Plemon, who will share strategies and techniques for using Twitter effectively to achieve school and district communication goals.