Who would have thought that popular rapper 50 Cent would teach us a lesson this summer? Unfortunately, this learning opportunity arose from a series of highly insensitive tweets he sent out to his 6.8 million followers. The tweets came after an over-zealous fan wrote, “Release the album or get shot again,” in anticipation of the rapper’s new album. 50 Cent proceeded to callously fling the word “autistic” back in an attempt to insult the individual. Instead, he managed to insult millions around the world. 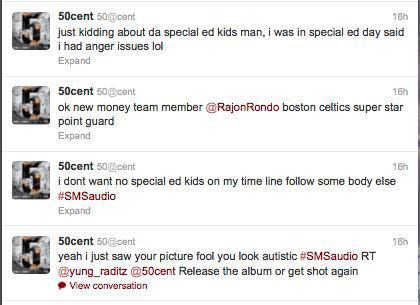 But the episode did produce at least one positive – the autism community banded together with a unified message. The most public response came from actress Holly Robinson Peete, whose son has autism. “Do you even know what autism is? And what exactly does “autistic” look like? Do you know how wildly prevalent autism is?” she wrote. Thousands of retweets and responses poured out of the autism community, with #whatautimlookslike starting to trend.

It’s unfortunate that increased autism awareness seems to be matched by increasingly careless use of the word “autistic.” Many people feel that it’s beginning to replace the “R-word,” or “retard,” as a commonplace insult. They could very well be correct – 50 Cent wasn’t the first to misuse the word, and he certainly won’t be the last.

One word becomes taboo, so people replace it with another that’s equally offensive. This tendency may be human nature, but it isn’t right. Think before you use the word “autism” lightly. It can hurt more people than you realize, and this very real disorder is far from a joking matter.