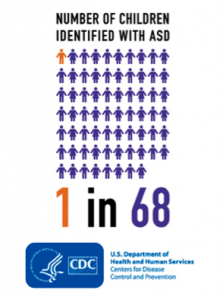 The Centers for Disease Control (CDC) released its updated report on the frequency of autism diagnoses, revealing that the number of children with autism spectrum disorder (ASD) continues to rise.

Now, one in 68 children under the age of eight are diagnosed with autism in the United States each year. The report represents an increase in the prevalence of autism since the CDC’s last report in 2012 (based on 2008 data), which found one out of 88 children was diagnosed yearly with ASD.

In a couple weeks, CB&A celebrates the 1-year anniversary of the launch of our Special Needs Division. As the first education public relations firm to specialize in this growing market, CB&A continues to support the increasing demand for products and services in the special needs community with the belief that all students deserve the chance for a quality education.

Nationally, it is estimated that more than 3 million people have an autism diagnosis. But behind each number is a human being who deserves respect, value and dignity.

We hope this new report leads to a renewed national, state and local commitment to support those living with autism. It is key to accept the strengths of the individual, while removing obstacles to success. Both in education and during the transition to adult life, we must empower every person with autism to embrace life’s opportunities and reach their full potential.