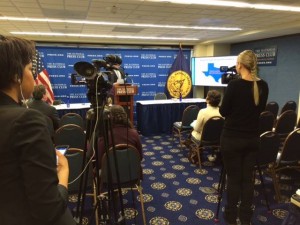 The Situation: A client that develops robots and curriculum to help children on the autism spectrum sought to establish itself as a thought leader by presenting at a National Press Club (NPC) event in Washington, D.C. CB&A facilitated the speaking opportunity, and developed a strategic media relations plan to further leverage the event.

The Results: The strong proposal by CB&A yielded an invitation to speak at an NPC Newsmaker Luncheon. In addition, CB&A secured coverage in a number of national consumer and education trade media outlets. While in D.C., the client also met with the U.S. Department of Education and the White House Office of Science and Technology Policy.

CB&A partnered with the client to develop a proposal to speak at an upcoming NPC Newsmaker Luncheon. To position the client as an expert on autism, CB&A drew upon previous national coverage the agency garnered for the client, including MSNBC and Fox News. After securing the speaking opportunity, CB&A engaged in the following communications activities to support participation in the event:

The NPC event was well attended by influential media such as Handicap International and Alternative Press. Media relations efforts produced coverage in 72 outlets, including Education World, eSchool News, Education Dive, MSN and a feature segment on CNN. This coverage generated 506 million impressions for the client.

The CNN feature was recorded while the client was in Washington, D.C., and aired a few weeks later for Autism Awareness Day. Over the next 24 hours, it was re-broadcast or posted by media outlets in 35 U.S. markets. The news reached more than 16.5 million Twitter followers of @CNN, and a Facebook post featuring the segment’s YouTube link generated more than one million views in 48 hours.