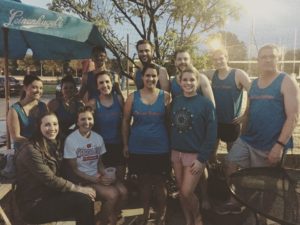 Eight weeks ago, we embarked on our inaugural season in one of Madison’s most prestigious recreation volleyball leagues – for those who dream of playing for the gold medal, but settle for laughs with friends instead.

With the first half of the season behind us, the Late Blohmers are definitely not in first place. But we didn’t go winless. While we review game film and work on our overhand serves, here’s an exclusive look at the team’s scouting report.

Through a savvy mix of underhand and overhand serves, the Late Blohmers were able to pitch their opponents from a variety of angles. As the season progressed, so did the accuracy and intensity of their serves, which will be pivotal in the season’s second half.

Since the team consists of professional communicators, this was definitely a team strength. With teammates calling the ball and everyone in the right place, the Late Blohmers were well-known for keeping the ball in play at all times.

Just as in any good workplace, the Late Blohmers developed the habit of setting up their teammates to complete the job. Team members came to realize that if their teammate succeeds, the team succeeds.

Similar to pitching a new client successfully or scoring a big piece of news coverage, the most exciting aspect of volleyball is a good spike. The Late Blohmers are nothing if not excitable, and aim to execute many spikes in the second half of the season.

The most important aspect of any scouting report. Opponents and referees applauded the Late Blohmers for team spirit and enthusiasm week in and week out. In this category, at least, the Late Blohmers triumphed over all!

Next scouting report is due in eight weeks.