I’m back after a week of learning at SXSWedu. Hot conference topics included content curation, educational gaming, social learning and open educational resources. I had the opportunity to hear from Secretary of Education Arne Duncan, LeVar Burton of Reading Rainbow fame (total childhood flashback) as well as many educators who are leading the charge in our nation’s schools. Plus, a visit to Austin isn’t complete without a Frank hotdog… scrumptious!

My favorite session: “EdTech Reporting: Why It Sucks and How to Fix It,” featured Audrey Watters of Hack Education, Betsy Corcoran of EdSurge, Frank Catalano and Lisa Wolfe. According to the session description, “much mass news media reporting about educational technology and digital learning tends to fall into one of two camps: blind cheerleading about how technology will solve all of education’s woes or negativity-filled diatribes about how tech just puts icing on a turd.” The panelists believe that education topics “need to be accurately reported in media outlets for there to be informed public dialog about technology in education.”

As a percentage of GDP, education is the second-largest U.S. industry, but research from The Brookings Institution indicates a clear lack of education coverage in the national media. During 2009, only 1.4 percent of national news coverage dealt with education. In 2008, only 0.7 percent of national news coverage involved education, while 1.0 percent did in 2007. Since 2009, education has made few gains among national outlets. Upticks in coverage are most frequently related to national policy decisions rather than school curricula, student progress or teacher performance. 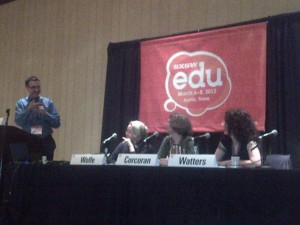 When asked to describe an effective article, Betsy Corcoran said it’s when a journalist asks a question and genuinely tries to go after the answer. Audrey Watters added, “A good article situates technology in terms of teaching and learning, not just as a magical tool that appears on a desk.” A reporter should also reach out to educators to see if a product passes the sniff test. Betsy agreed: “If you can’t talk to the user then you don’t have a story.” The two stressed the importance of storytelling, observing that companies can boost coverage by telling their story through customers.

To supplement the advice shared at SXSWedu, CB&A has compiled a list of tips for educators on how to build awareness of their achievements in local and national media outlets. The first step to generating positive education news coverage is realizing that there are amazing things going on in education all the time. While the media often accentuate scandal, and the perceived decline in the American education system, teachers and students are making progress every day.

Below are a few of the tips for educators:

Whether you’re an educator or member of the education industry, how are you supporting the effort to share positive ed tech stories on a local or national scale?