Exploring How Special Education Fits into Testing Accountability Under the ESSA 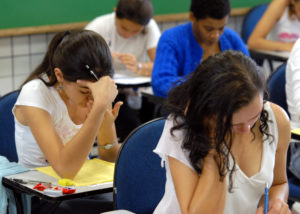 The number of students in special needs programs under the Individuals with Disabilities Act (IDEA) is on the rise. According to the U.S. Department of Education, there were a reported 5.83 million students with disabilities in 2014, a population that outnumbers English Language Learners (ELL) in public schools by 1.4 million.

To address a growing student population — one of which the determined cause of growth is still unclear — the recently enacted Every Student Succeeds Act (ESSA) reformed federal and state special education standards, specifically regarding special education testing regulations.

Special education testing quotas fit to the ESSA’s tune of K-12 accountability. Previously, any number of students with disabilities could take alternative tests, however only one percent of these test scores could be counted as proficient. Now, only one percent of the student population can qualify as having the most significant cognitive disabilities to receive alternative testing. This notable change is intended to hold schools to standards that determine which students are deserving of testing accommodations.

To put ESSA testing regulations into context, the rise of special education students is thought to be attributed to inappropriately assigning students who have difficulties in a general education setting to receive instruction in a special education classroom. Alternatively, schools and districts may need new methods to thoroughly assess a student’s individual needs.

The fine print to special education testing regulations under the ESSA gets complicated quickly. States are to set their own definitions for “severe cognitive disabilities,” and are also able to apply for waivers to qualify more than one percent of their student population as deserving of alternative testing.

First, let’s take a step back. Where does disproportionality in special education fit?

Disproportionality of minority representation in special education draws attention to students who may be inappropriately identified as deserving of special education services and taken away from the general education classroom, when, in fact, they do not have a physical or mental disability.

However, research suggests that minority populations are in fact underrepresented in early intervention and physical and mental health diagnoses. Factors such as lower socioeconomic status and language receptivity are suggested to play a factor in this misrepresentation.

To mend this issue, the Department of Education is recognizing the importance of early intervention services, especially for minority populations. The Individuals with Disabilities Education Act (IDEA) was reauthorized in 2004 to continue providing free and appropriate educational services for those with disabilities. A proposal to amend IDEA, made in March, includes a formula (detailed in Samuel’s piece on disproportionality above) that would allow districts that exceed the average proportion of minorities in special education to allocate funding toward early intervention services.

In summary, the ESSA takes special education testing regulations one step forward in addressing testing accountability. It creates a direct motive for determining appropriate accommodations for individual students. However, special education placement is a multilayered issue. Providing access to proper resources at both the federal and state level, rather than regulations alone, has the potential to support districts in providing the appropriate educational services for all students.