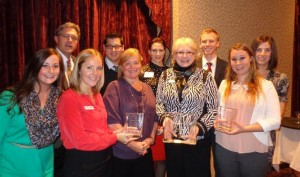 Honored by three Awards of Excellence for a trio of campaigns completed in the past year, the CB&A team was thrilled by a Best in Show award for our Media Central campaign hosted at the International Society for Technology in Education 2012 Conference. CB&A shared the evening’s top campaign award with St. Mary’s Hospital, which was honored for its work celebrating the organization’s centennial.

The three CB&A campaigns that were recognized with awards, followed by a few details explaining each, are listed below: 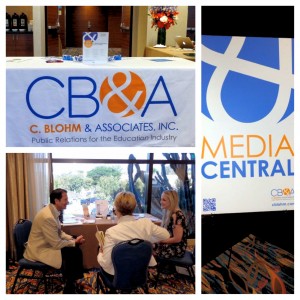 A collage of photos taken at CB&A’s Media Central at ISTE 2012.

Having been nominated for three awards and coming home with four honors was an extremely humbling and rewarding experience for the CB&A team.

The awards are a culmination of many hours of hard work by everyone at CB&A. From planning the many facets of hosting Media Central, to developing the infographic, to maintaining our beautiful website, and even for the time and effort it required to create the successful award entries – all of the projects were extremely challenging, but very rewarding in the end.

Thanks to the folks at PRSA-Madison for hosting a wonderful event, and a “Congratulations” to all the other Alchemy Award winners.

For a full recap of the evening’s awards, please read the official PRSA-Madison news release.