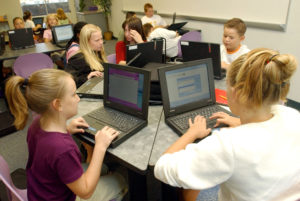 The Situation: A client that creates robots to teach K-5 students foundational skills in computer coding wanted to build credibility in the education sector and distinguish its products as not simply toys, but hands-on learning tools for the classroom. In order to accomplish these goals, CB&A created a media strategy that leveraged real-life stories from classrooms, teachers and thought leaders.

Because of the client’s split markets, consumer and education, CB&A partnered with a B2C firm. The collaboration created the opportunity for CB&A to navigate relationships, design integrated messaging across different types of media and reach a multitude of audiences.

The Results: CB&A secured feature coverage and contributed articles about a variety of educators, from a Kindergarten teacher to a professor of applied math. CB&A leveraged these stories to broaden reach and recognition for the client in the education industry.

CB&A conducted interviews with educators and studied social media trends to ascertain insights and differentiate the client’s products from its competition. CB&A carried out these tactics as a part of larger strategy aligning with a series of events and promotions, especially during the month of December.

To support the execution of a nationwide robotics competition, CB&A conducted timely pitching previewing and announcing the competition. The outreach garnered media features encouraging students to participate. During the competition, CB&A interviewed several educators active on Twitter to gather classroom stories for monthly pitching topics. These stories, along with those of the top five finalists, resulted in multiple leads to extend media efforts beyond the competition closing The net result included contributed pieces, features and broadcast segments in local consumer media outlets.

To position the client as the ideal tool for K-5 coding curriculum, CB&A developed and executed several strategies that combined the client’s unique voice with larger STEM themes to tell relevant and engaging stories. CB&A highlighted the positive impact and accessibility of the client’s product as a tool for the everyday classroom in order to better target relevant outlets and audiences.

Securing a number of feature stories and contributed pieces in targeted news outlets, CB&A demonstrated its expertise in the in the education market and illustrated its creative aptitude for being visible where it matters.